Village Volunteers are Recognized in Lakewood

HomeVillage Volunteers are Recognized in Lakewood 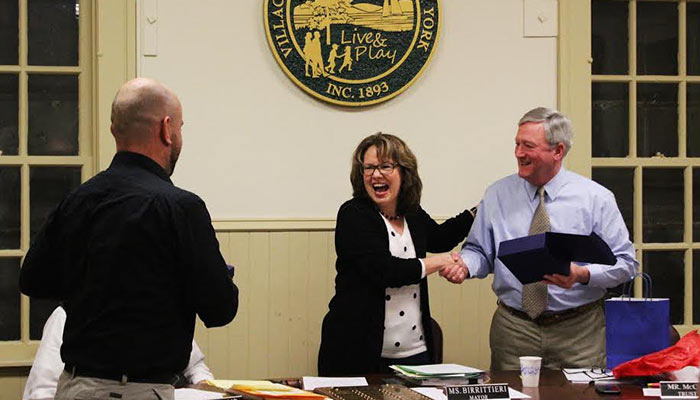 The names of the two awardees for the first volunteer of the year awards in Lakewood were revealed during the start of the regular Village of Lakewood Board of Trustee meeting January 23, 2107. Both recipients were caught totally by surprise as Mayor Cara Birrittieri unwrapped a perpetual plaque with their names as the first two.

Those receiving the Lakewood first annual Volunteer of the Year Awards are Edward “Ted” McCague for his work leading the effort and chairing the Comprehensive Planning Steering Committee toward adoption of the Comprehensive Plan, and Scott Mekus, of Eventz by Scott, for Co-Chairing the newly created Lakewood Events and Marketing Committee, and bringing larger events and greater marketing efforts under budget during 2016.

During her remarks Mayor Birrittieri said, “Ted McCague worked tirelessly for the past two years, and in particular the past year to bring our comprehensive plan to the implementation phase. He has put in countless hours on this document which will stand the test of time.” Both recipients received a star shaped award with a quote chosen for each. The inscription on McCague’s award reads, “The brightest stars are those who shine for the benefit of others.”

Birrittieri praised Mekus’ efforts as well, “Scott has been the master-mind behind all of our planning for our events this past year. The detail with which he plans events is amazing, and he has made the village proud.” The inscription on Mekus’ award reads, “Those who can, do, those who can do more, volunteer.”

The perpetual plaque can be seen at village hall. It was donated to the village by the mayor and her husband A. Jackson Smith, Jr., Lakewood native, and SWHS ’87.

Original article by the Jamestown Gazette.